Posted on 24,03, by Americaoncoffee 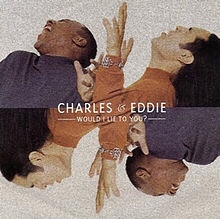 “Would I Lie to You?” is an R&B song by American duo Charles & Eddie. Written by Mike Leeson and Peter Vale and produced by Josh Deutsch, “Would I Lie to You?” was the debut single by the pop-soul duo, taken from their first album, Duophonic. It proved to be their biggest hit and a major international success.

The song reached number-one on the UK Singles Chart for two weeks in November 1992, and was also number one in New Zealand, Germany, Austria and Zimbabwe. It was a top five hit in several other European countries while in Australia and Canada it went to number 3.

The single became a Top 20 hit in the US, peaking at number 13 on the Billboard Hot 100 and it achieved award-winning sales, earning a platinum record in the UK, a gold record in both Germany and Austria and silver record award in France.

One thought on “Charles and Eddie “Would I Lie To You?””