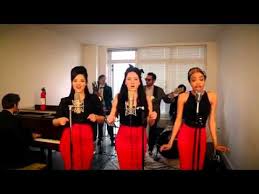 Robyn Adele Anderson (born February 19, 1989) is a multilingual vocalist based in New York City. She is a cast member and featured artist for Postmodern Jukebox with over 145 million YouTube views of her music videos. She is credited with the band’s breakthrough cover of “Thrift Shop” and “We Can’t Stop” in 2013. Anderson also performed lead vocals for performances on Good Morning America (ABC) in 2013, and TEDx in 2014.