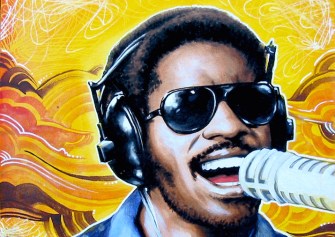 The song was originally recorded from late 1967 to early 1968, but not released until early 1969. The song was co-written by Wonder, Sylvia Moy, and Henry Cosby; Cosby also served as producer of the song.

The song was originally written about Wonder’s girlfriend while he was at the Michigan School for the Blind in Lansing, Michigan, and had the title “Oh My Marsha”. After they broke up, the lyrics and title were altered to the more general “My Cherie Amour”. All the instruments except for the horns and the strings were recorded on November 8, 1967. Then, on November 17 of that year, the horns and strings were added at Golden World Records, one year before it was acquired by Motown. Finally, Wonder’s vocals were added on January 15, 1968, but it was not released until January 28, 1969 because at the time of the song’s release, Wonder had some vocal problems and had to wait until the problems were gone, so Motown decided to release some songs that Wonder had recorded years before and “My Cherie Amour” was one of them. The song became a #4 hit on both the Billboard pop and R&B singles charts in July 1969. Wonder also released Spanish- and Italian-language versions entitled “Mi Querido Amor” and “My Cherie Amor”, respectively.

EditThe song was originally written about Wonder’s girlfriend while he was at the Michigan School for the Blind in Lansing, Michigan, and

Amos Lee (born Ryan Anthony Massaro, is an American singer-songwriter whose musical style encompasses folk, rock and soul. He was born in Philadelphia and graduated from the… END_OF_DOCUMENT_TOKEN_TO_BE_REPLACED

“Smooth Operator” is a song by the English group Sade, released as the fourth and final single from their debut album Diamond Life (1984). It was released… END_OF_DOCUMENT_TOKEN_TO_BE_REPLACED

Falafels — You Gotta Make This

Will the Milan Starbucks tempt Italians inside? Photo: Starbucks Starbucks claims its Milan branch, which opens to the public this week, is “the world’s most beautiful”. So… END_OF_DOCUMENT_TOKEN_TO_BE_REPLACED