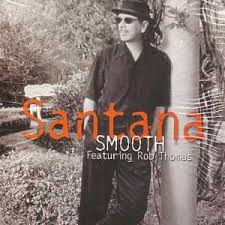 “Smooth” is a collaboration between Latin rock band Santana and Matchbox Twenty vocalist Rob Thomas. The song was written by Thomas, DeGaetano, and Itaal Shur, produced by Matt Serletic and sung by Thomas. It won three Grammy Awards: Record of the Year, Song of the Year, and Best Pop Collaboration with Vocals. Not only was it the final number-one Hot 100 hit of the 1990s, it was also the number-two Hot 100 hit of the 20th century. “Smooth” is the only song to appear on two decade-end Billboard charts. As of 2013, “Smooth” is ranked the second most successful song of all time by Billboard.

“Smooth” was originally conceived by Shur as a song called “Room 17”. The lyrics were stripped off and the track was given to Thomas, who re-wrote the lyrics and melody and re-titled it “Smooth”, then recorded the song as a demo to play for Santana. After hearing the song, Santana decided to have Thomas record the final version.[1] Matt Serletic (who produced Matchbox Twenty’s debut album Yourself or Someone Like You) produced the song and it was released from Santana’s album Supernatural.

Thomas wrote “Smooth” for his wife, Marisol Maldonado. He stated in interviews that the lyric “My Spanish Harlem Mona Lisa” was inspired by the 1972 Elton John song “Mona Lisas and Mad Hatters”,[citation needed] which includes references to the 1961 Ben E. King song “Spanish Harlem”.

“Smooth” became a massive hit in 1999, spending 12 weeks at number one on the Billboard Hot 100 beginning with the October 23, 1999 issue. It was the first chart-topping song in Carlos Santana’s long-running career (his previous biggest hit being “Black Magic Woman”, which peaked at number four in 1971).

The song stayed in the top ten of the Billboard Hot 100 for 30 weeks, a record only bested by “How Do I Live” by LeAnn Rimes. In 2015, Mark Ronson’s “Uptown Funk” also surpassed “Smooth” by spending 31 weeks in the top ten.

In the United Kingdom, “Smooth” first charted at number 75 in the UK Singles Chart in October 1999. On a full release in March 2000 it peaked at number 3, spending eight weeks in the top 40.

“Smooth” also spent a record-breaking ten consecutive weeks at the top of the VSpot Top 20 Countdown, a record that held up until the Dixie Chicks broke it in 2006. Source