Posted on 21,12, by Americaoncoffee

Dining with the Hobbits at Hobbit Tavern in Boraclay Philippines

“We indulged instead in Frozen Ice Cream, Banana Split and Irish Coffee.

During this time at Hobbit Tavern, I was also able to chat with the “hobbits”, whose cheerful, willful and easy-going energies I was so grateful to have exchanged with.

Thus, with memories of Hobbit Tavern’s wonderful gastronomy and amazing staff, I will be glad to relive them again, also to catch acoustic guitar performances by some of the island’s talented musicians.”

Here’s my full story from spokesman.com: By Betsy Z. Russell

And now Lord of the Rings fans can too, with a vacation getaway in a cozy burrow under a hill near Chelan, Washington, developed by a tiny-house entrepreneur from Boise.

Kristie Wolfe opened her first Hobbit Hole vacation rental through Airbnb this spring, with two more planned in a 5-acre village along an Eastern Washington hillside that could be from The Shire of J.R.R. Tolkien.

Wrote one recent visitor, “Definitely a recommendation to any weary wanderers wanting to get away from it all and rest their hairy feet.”

It’s 288 square feet of rustic comfort overlooking the Columbia River, including woodworking tools so the occupants can do a bit of whittling, a stone fireplace, a pastry and coffee bar, tub for two and off-the-grid solar power and running water. When visitors book their stay, they receive a Tolkien-style map with directions, like something right out of Middle-earth.

“The majority of your neighbors will be deer, rabbits, birds and grouse,” Wolfe writes on her Airbnb listing. “It’s 2 miles up the mountain, and although there are houses it gets more remote the closer you get to the hobbit hole.”

Wolfe has turned her small-living love into her living. First, she built a 97-square-foot tiny house in Boise with recycled and reclaimed materials, and lived there for a year, finding that it fit.

“The forced simplicity is hard to explain, unless you don’t have a lot of stuff weighing you down,” she said.

After moving the tiny house to an isolated, sagebrush-desert parcel she purchased south of Boise – where it’s now under construction to add a kitchen to its off-the-grid “tiny house on the prairie” setup – she took on a more ambitious project: A tiny treehouse in the rainforest on the Big Island of Hawaii, now a popular and nearly always booked vacation rental.

In between, she spent parts of two years traveling the country on a truck shaped like a giant, 6-ton Idaho potato, working as a spokeswoman for the Idaho Potato Commission. It was an ideal job for Wolfe, a well-read high school dropout and daughter of a school teacher. She hails from Pocatello and loves Idaho and potatoes; she once spent a year covered in dirt from head to toe, working at a Simplot potato factory in eastern Idaho, sorting tubers as they arrived in the receiving department.

In the months-long stints traveling the country on the giant-potato truck, along with a driver and another spokesperson – “It could be Times Square or a town of 400 people” – Wolfe said there was one question she got everywhere: “Is it real?”

“We never say yes or no,” she said of the giant potato, which is made of concrete. “We say, ‘It’s really big’ or ‘It’s really awesome.’”

Wolfe grew up helping her mom and five siblings remodel the houses where they lived and then sell them to make extra money. She and her brothers and sisters all learned to use tools, and she fell in love with construction, she said.

She owned a clothing store in Pocatello for three years in a commercial building she and her brother remodeled, and helped people flip houses. Her tiny-house build was her first from the ground up, constructed in her aunt’s backyard.

Wolfe’s mother helped her build the Hawaiian treehouse, which features a dreamy hanging bed suspended below the tiny living space made from a trampoline, a rainwater collection system and solar power. When her mom balked at working on ladders high above the mud, “I kept telling her, ‘Well, the next one will be on the ground, the next one will be in the hill,’” Wolfe said.

That’s the hobbit hole. Wolfe and her mom toured Oregon and Washington by car, looking for the right spot, before finding the hillside near Chelan that spoke to her of the Shire, of which Tolkien wrote, “They passed through hobbit-lands, a wide, respectable country inhabited by decent folk, with good roads, an inn or two, and now and then a dwarf or a farmer ambling along on business.”

Wolfe signed on with HGTV last fall to construct her hobbit hole as a pilot for a reality TV series, but it wasn’t picked up. She wasn’t thrilled with the TV experience, and says if she does it again, she’d want to own the production company.

But the hobbit hole was a success. “This one is permitted – Douglas County was awesome and worked with us,” she said. “I did lots of research.”

Though Wolfe had done everything herself, with her mom’s help, on her previous two tiny-house builds, she hired excavators and other experts to help create the hobbit hole in the hillside. Construction was completed last fall, but the utilities weren’t hooked up; over the winter, it was surrounded by up to five feet of snow, and stayed snug and dry inside. That was “a good test,” Wolfe said.

The hobbit hole opened to renters in May; it rents for between $200 and $250 a night, depending on the date, plus a $75 cleaning fee. It’s solar-powered, and water is trucked in to a nearby water tower that’s gravity-fed to the hideaway. “So far, we’ve got half the summer booked,” Wolfe said. Visitors have come to stay from Spokane, Wenatchee and Seattle.

Like her other two tiny houses, the hobbit hole didn’t include a kitchen, but Wolfe is planning a communal, pub-style kitchen in the future for her “Hobbit Inn” village, along with two other hobbit-hole getaways. The first is themed as if a hobbit woodworker lived there; the second will be more feminine and themed for a beekeeper, complete with hives. The third will be the hobbit hole of an adventurer, filled with books and maps. Each will comfortably accommodate a couple.

For now, guests either bring a cooler and camp stove for their meals, or head out to eat in Chelan, about 20 minutes away.

Wolfe is 33, “which is the same age that hobbits come of age,” she notes.

Though she likes the Tolkien stories, it was her two brothers who were obsessed with the Lord of the Rings. That’s come in handy, “whenever I need to fact-check something,” she said. True fans will find authentic little touches.

And a special event will occur in June – not an eleventy-first birthday party, like the fateful one celebrated by Bilbo Baggins, but something perhaps even more extraordinary: The giant Idaho potato truck, back out on the road, will pay a visit to the hobbit hole, or at least its vicinity. The truck is scheduled for a stop in downtown Chelan on June 29. Source

Catherine has cracked on this kind of house and asks me for information First a small gallery of these houses worthy of Tolkien, be careful they will be fashionable before Christmas because Bilbo will go out to the movies.. [ici] Source 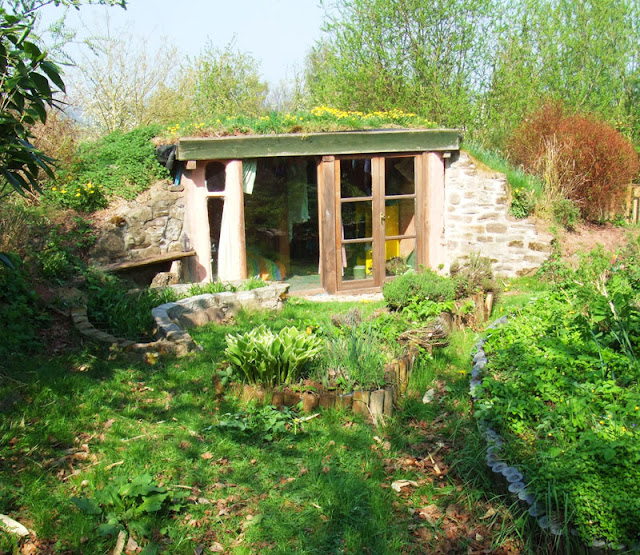 So, first choose his version: buried or not, then a good architect not too conventional and wanting to embark on the adventure I advise him to go for a walk here in France. Or to spend a night there: The “desired” Cachette between Paris and Reims The “desired” cache The “desired” cache I also recommend the site of Simon Dale, a specialist I hope I have answered and hope that she will keep me informed of the next events.

Or to spend a night there: (Ou de passer une nuit[ là ] Source

I hope I have answered and hope that she will keep me informed of the next events. Source

On picturesque private farmland n ear Matamata on the North Island of New Zealand, I visited the remnants of the original Hobbiton movie set from “The Lord of the Rings” trilogy.

In September 1998 Peter Jackson and New Line Cinema discovered the Alexander family farm during an aerial search for suitable film sites for “The Lord of the Rings”. The fantastic views and rolling country side of the Alexander Farm closely resembled that of Middle-earth as described by author, J.R.R Tolkien.

The large established pine tree, later re-named the party tree, was already perfectly placed in front of the lake. The surrounding rolling farmland was untouched by 20th century clutter such as roads, buildings or power lines. The farm was perfect.

Site construction started in March 1999. Initially this involved heavy earthmoving machinery provided by the New Zealand Army. Total site construction took nine months. Throughout construction and filming all activity on the site was kept under strict security due to commercial restraints by the movie company.

After filming on the site was completed heavy rain stopped the dismantling of the set, leaving about half the hobbit homes in place. New Line Cinema canceled plans for removing the remaining set and granted permission to the Alexander family to allow public access which has resulted in thousands of visitors each year since 2004.

The set has been rebuilt for the fillming of “The Hobbit”, which began late in 2010.