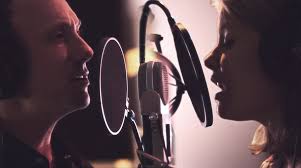 “Mademoiselle Noir” is a video created by HitREcord and Levi’sR, featuring vocals by peppina.

The story of the video is a dark twist on the fairytale “Rapunzel”. A young man comes upon a tower in a dark forest, and he looks up to see a pale young woman with black hair so long it descends down the tower wall. She sings a verse in French, while petting a raven. The man becomes frightened and runs to the village and tells the villagers about the woman, believing she is a living dead – this is supposably confirmed when the man recognizes the woman’s picture in a book. The townsfolk go to the tower and are also frightened by the pale woman’s appearance, and her song which she sings again to the villagers. The villagers decide she is a demon, and set her hair on fire to burn her to death. The young man, however, discovers the woman’s true identity when he finds her real picture in the book – but he is too late, and the woman sings her song one last time as she burns. The lyrics are translated on the screen: “Me, my name is Lady Black, and as you can see I don’t smile or laugh or live”…and that is all she said.

This page was created by a fan of the video who has watched it about a hundred times.