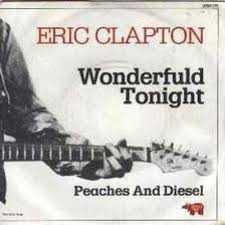 “Wonderful Tonight” is a ballad written by Eric Clapton. It was included on Clapton’s 1977 album Slowhand. Clapton wrote the song about Pattie Boyd.[1] The female vocal harmonies on the song are provided by Marcella Detroit (then Marcy Levy) and Yvonne Elliman.

On 7 September 1976, Clapton wrote “Wonderful Tonight” for Boyd while waiting for her to get ready to attend Paul and Linda McCartney’s annual Buddy Holly party. Of “Wonderful Tonight”, Boyd would say: “For years it tore at me. To have inspired Eric, and George before him, to write such music was so flattering. ‘Wonderful Tonight’ was the most poignant reminder of all that was good in our relationship, and when things went wrong it was torture to hear it.”[2] The song is mentioned in her autobiographical book Wonderful Tonight: George Harrison, Eric Clapton, and Me.

In 1988, Clapton appeared in the Nelson Mandela 70th Birthday Tribute concert as a guest guitarist for Dire Straits. The group became his backing musicians for a surprise performance of “Wonderful Tonight” during their set. The song was featured in the film Captain Phillips and in the Friends season 6 episode “The One With the Proposal Part 2” (18 May 2000) where Monica and Chandler dance to it at the end of the episode after getting engaged. The song was also featured on Ricky Gervais’s radio show, where producer Karl Pilkington argued that the lyrics suggested that it came from the point of view of a disabled man in a wheelchair. Both Gervais and co-host Stephen Merchant dismissed Pilkington’s claims as conjecture. Clapton performed an extended version of “Wonderful Tonight” between 1987 and 2003, featuring Katie Kissoon and Tracy Ackerman on backing vocals and David Sancious on saxophone. Clapton and Steve Winwood performed an acoustic version of the song during their 2011 tour in Japan.
en.m.wikipedia.org

“Luka” is a song written and recorded by Suzanne Vega, released as a single in 1987. It remains her highest-charting hit in the United States, reaching No. 3 on the Billboard Hot… END_OF_DOCUMENT_TOKEN_TO_BE_REPLACED

Day was born on December 30, 1984 in Edmonds, Washington. She moved to Southern California at age three, and grew up in and around San Diego, California,… END_OF_DOCUMENT_TOKEN_TO_BE_REPLACED

This American Buttermilk pie is to make and I show you how to make your own buttermilk. I promise the pie will not last for long as… END_OF_DOCUMENT_TOKEN_TO_BE_REPLACED